Home » Accountability: Be Good Enough To Beat The Ref

Accountability: Be Good Enough To Beat The Ref 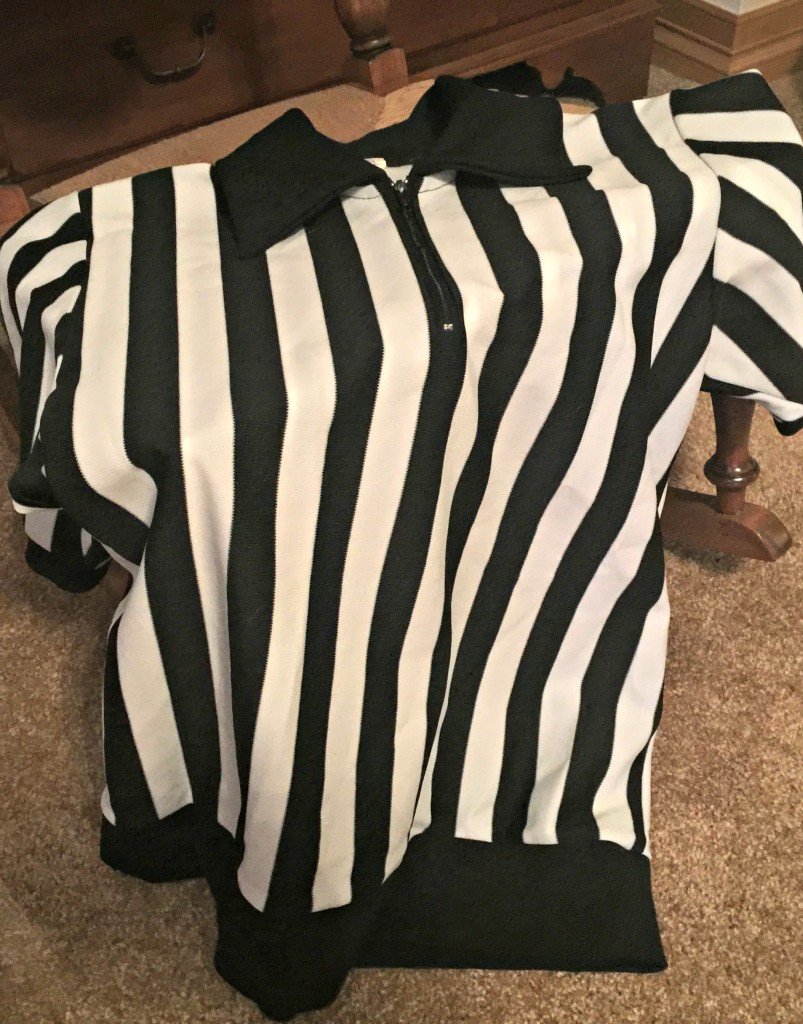 The photo above is of the actual shirt I wore when officiating high school wrestling matches in the Southern Tier of New York State from 1978-1980. As a Cornell student, it was a fun and meaningful way to make money. Recently discovering it, I am reminded daily of what my dad taught me—and many others—about personal accountability. An idea so powerful it became a chapter in QBQ! The Question Behind the Question.

With NFL playoff football ahead, this message couldn’t be more timely. So, share on!

My father, Jimmy Miller, was the head wrestling coach at Cornell University in Ithaca, New York, for more than twenty-five years. When he sent me out to the mat, he’d always remind me I had three people to beat that day: my opponent, myself, and the referee.

That I had to beat my opponent was obvious. By “myself” he meant I had to overcome the fears any athlete naturally has. About beating the ref, he’d say, “It doesn’t matter how close the match is, John. Even if you lose in overtime by one point, even if the official makes a couple of questionable calls, you cannot blame the man in black and white.”

He’d conclude by saying, “If you want to win, you must be good enough to beat the ref!”

Good enough to beat the ref. That means being a salesperson who has the maturity to say, “I was outsold!” instead of complaining about the product, the price, and the lack of advertising. It means serving as a team member who never says, “When will others pull their own weight?” It means being a manager who doesn’t whine, “Why aren’t my people motivated?” and “When will they get engaged?” It means being the person who doesn’t complain about management, saying, “Why don’t they tell us what’s going on?”

Who is the “ref” in your life? What person or circumstance beyond your control is standing between you and success? Could it be a supervisor who over-manages, making it difficult for you to do your job, or inefficient systems built into your organization that waste a lot of your time? Or maybe it’s a personal problem that drains your energy.

No matter what we’re trying to accomplish, there’s always a barrier of some kind to overcome, and it’s often something over which we have no control. Instead of focusing on the barriers—wasting precious time, talent, and energy—let’s work to become so good that we’ll succeed no matter how many bad calls the ref may throw at us.

If you want to win, don’t focus on or complain about the things beyond your control. Some problems are best let go. For all the rest, be good enough to beat the ref.

If you’re not getting our FREE QBQ! blogs by email, click here!

John G. Miller is the author of QBQ! The Question Behind the Question, Flipping the Switch: Unleash the Power of Personal Accountability, Outstanding! 47 Ways to Make Your Organization Exceptional and co-author of Raising Accountable Kids. He is the founder of QBQ, Inc., an organizational development firm dedicated to “Helping Organizations Make Personal Accountability a Core Value.” A 1980 graduate of Cornell University, John has been involved in the training and speaking industry since 1986. He lives in Denver, Colorado, with his wife, Karen. The Millers have 7 children and a really big bunch of grandkids! To reach John, email John@QBQ.com.
All Posts »
PrevPreviousAccountability: 13 New Year’s Questions For Personal Growth
NextPersonal Accountability: My 5 Anti-Victim Thinking CommitmentsNext