What We Have Here Is a Failure to Practice PERSONAL ACCOUNTABILITY 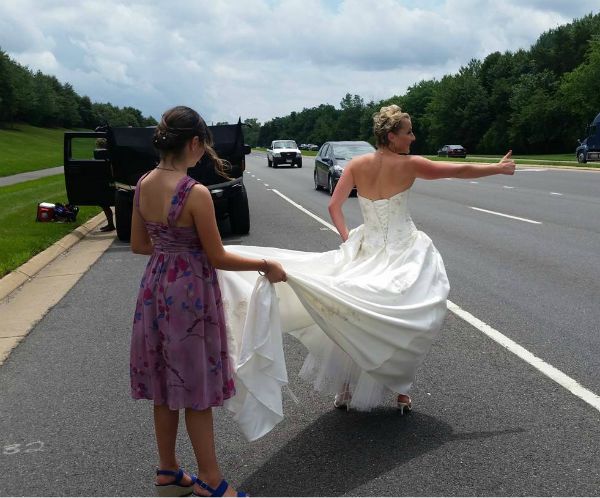 Tony, a QBQ! training distributor for ten years, just retired. We were proud to have him on our team for many reasons. One of those reasons is … he gets it.

John, on my son, Tony’s, big day, the wedding party of 11 was picked up in a stretch limo for the hour ride to the ceremony location. Right away we noticed the vehicle’s air conditioning wasn’t working well and within minutes the driver pulled over to the shoulder of the busy 4-lane highway because …

The engine was smoking!

Wondering what was happening, we all climbed out.

Spirits were high, though, as the wedding photographer started snapping shots of Amanda the bride “thumbing for a ride” in her wedding dress. Drivers honked, smiled, and waved.

However, it was an hour before a grumpy guy arrived from the car service firm in a small van. He poured antifreeze and water into the limo’s radiator but—to our amazement—the liquid ran out onto the pavement!

That’s when we really knew we had a problem.

The eleven of us then climbed into the van—that had only ten seats—and headed to the ceremony.

Upon arriving, the bride and groom asked the van driver to return in two hours with a limo that could seat everyone comfortably for the ride to downtown Washington, D.C. for the wedding dinner.

At the appointed time, he returned, but with the same small van. Though no “stretch” was coming, he informed us, another van was en route to ease the crowding.

However, it was stuck in traffic.

Finally, with no ETA provided by the transportation company, my son and his new wife fired the limo company, adding they did not expect to pay for the “service” rendered.

Several in our party started making calls and another car provider was found, quickly dispatching a fine limo capable of seating everyone in style. We arrived at the restaurant hours behind schedule, but found the staff there to be understanding, and the meal outstanding.

A fun time was had by a very tired wedding party!

As this experience unfolded, I kept thinking—after selling the QBQ! training system and its message of personal accountability to my clients for years—what’s The Question Behind the Question for the original limo company and its staff? There are many, but this one sums it up:

“What can I do to solve this problem and make my customer happy?!”

So simple, so accountable, so powerful—but nobody was asking that QBQ. They simply showed no responsibility for their mechanically-challenged limo or for failing to have a back-up plan.

I also noted that the entire wedding party was abuzz about the poor service and—believe you me—everyone at the wedding site and the restaurant heard the story.

An organization’s reputation—good or bad—is made by the actions and attitudes of its people!

When I told an old friend about our experience the following day, he asked, “What’s the original limo company’s name and what’s the name of the one that saved the day?”

After telling him, I asked why he cared to know the specifics. His response is key. He said he wanted to be certain to NEVER use the one that provided the lousy service and to be sure to hire the organization that took care of us!

Yes, Tony gets it, he really does. What he gets isn’t new, just true:

People fire organizations, but they don’t fire the outstanding ones!

Is your organization outstanding?

If you are a self-employed, independent trainer/consultant who would like to explore becoming a distributor of the QBQ! training program, inquire here.

If you are not subscribed to our free blog emails, go here.

John G. Miller is the author of QBQ! The Question Behind the Question, Flipping the Switch: Unleash the Power of Personal Accountability, Outstanding! 47 Ways to Make Your Organization Exceptional and co-author of Raising Accountable Kids. He is the founder of QBQ, Inc., an organizational development firm dedicated to “Helping Organizations Make Personal Accountability a Core Value.” A 1980 graduate of Cornell University, John has been involved in the training and speaking industry since 1986. He lives in Denver, Colorado, with his wife, Karen. The Millers have 7 children and 14 grandkids. To reach John, email John@QBQ.com.
All Posts »
PrevPreviousIf We Can’t Earn Your Business, Hire Mark Sanborn
Next15 Things You Don’t Need College To LearnNext