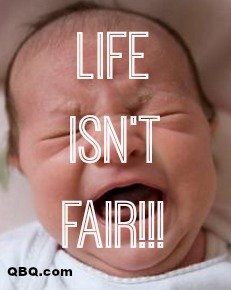 The truth is, no one is promised “fairness.” Humans make hurtful comments, accidents occur, events take a turn we don’t expect, others are blessed with talents we lack, things happen out of our control.

I’ve not had a mother since Gerald Ford was president, the Bee Gees were huge, and Star Wars was only in George Lucas’ mind.

While attending a Tuesday afternoon meeting, Mary Miller, age 51, experienced a blinding headache, slumped on a friend’s sofa, and was rushed to the Ithaca, NY hospital. Two hours later she was gone. An aneurysm took her.

I was eight days shy of turning 17.

But, I’d certainly never resent my fiftysomething friends today for still having their mom.

As ridiculous as begrudging others for having greater success, achievements, possessions, financial status, and good fortune than I do.

Envy doesn’t wear well, and neither does the “It’s not fair! I’m a victim!” mentality that pervades our world today.

When I play victim, I serve nobody—not even myself.

At QBQ, Inc. we recommend asking accountable questions like, “How can I move forward today?” “What can I do to achieve new goals?” and “How can I make a difference?”

Related posts
What Matters Most: Being Outstanding EVERY Time
January 14, 2021
Accountable People NEVER Stop Growing Up
October 19, 2020
Accountability & Youth: Slowing the Spread of Blame
August 6, 2020
“Why Me?” Is Always The Wrong Question
July 30, 2020
Excuse-Making: Anyone Can Do It!
July 20, 2020
10 Characteristics of Successful People
June 4, 2020
Leave Comment