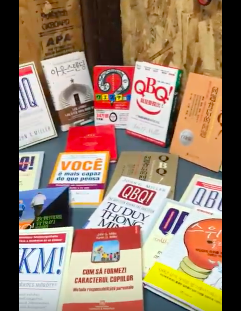 “It takes 20 years to make an overnight success.”

It’s true, we usually don’t know how the now-famous actor waited tables for years or the big name music group spent a decade singing in hotel lounges before hitting the big time.

Or how a non-famous QBQ! author and speaker started—unless he comes to you from his Colorado barn on video!

Enjoy a quick 3-minute video of The QBQ! Guy sharing a bit of QBQ! history and …

Watch The Video Below To Earn The Chance To Win!

Challenge: In the video, how many languages do I say the QBQ! book has been published in? (I only say it once!)

Action: Email that number to info@QBQ.com and get your name entered into our drawing for …

Here is the video link:

“QBQ! History From The Author’s Barn”

Thanks for watching—and emailing! Now, enjoy a brief Q&A on the “story behind the story” of QBQ! …

John, how did your career begin?

In 1986, at age 28, I began 9 1/2 years of selling management training to corporations in Minneapolis/St. Paul, Minnesota. My “office” was the furnace/water heater room in our Brooklyn Center, MN basement!

How did you become a speaker and author?

In 1995, after almost ten years selling management training, I decided to start speaking on this idea I had created called “QBQ.” Soon after, I wrote my first book.

What does “QBQ” stand for—and do for people?

QBQ represents The Question Behind the Question—and it enables each of us to live a life of Personal Accountability by eliminating Blame, Finger-pointing, Victim/Entitlement Thinking, Complaining, and Procrastination.

How did you create the “QBQ” concept?

Sitting in 10,000 hours of management training sessions, I heard clients asking costly questions such as, “Why do we have to go through all this change?” “When is someone going to train me?” and “Who dropped the ball?”

So I started teaching people how to turn those questions around and instead ask, “How can I adapt to the changing world?” “What can I do to develop myself?” and “How can I help solve the problem?”

This was the birth of the concept called “The Question Behind the Question”—soon shortened to “QBQ.” For lots of people, the QBQ methodology became the “how to” for practicing Personal Accountability.

In 1995, you began building your speaking/writing career around one principle: Personal Accountability. How come?

What was your first book and who published it?

Titled Personal Accountability and self-published in 1998 under the name “Denver Press,” the first book was … 300 pages! When the Who Moved My Cheese? phenomenon hit and the corporate market wanted quicker reads, we downsized it, publishing the title QBQ! The Question Behind the Question. In 2004, we sold QBQ! to Penguin Random House in NYC, our publisher and good partner today.

How many QBQ! books have sold?

1.5 million in five editions, with the “new and improved” 5th edition now on the market!

What does QBQ, Inc. do today?

We conduct QBQ! workshops and speaking engagements, license QBQ! training to corporations for internal use, and sell lots of books. All at QBQ.com, a URL we’ve owned since 1998. Stop by today!

Thanks for enjoying a bit of our history. Now …

If you know and practice QBQ! at work or home, what is the #1 benefit you’ve experienced? Leave a comment … we’d love to know!

Don’t forget to watch the video and email that key number to info@QBQ.com. If you don’t, you won’t have a chance to win five autographed books!

John G. Miller is the author of QBQ! The Question Behind the Question, Flipping the Switch: Unleash the Power of Personal Accountability, Outstanding! 47 Ways to Make Your Organization Exceptional and co-author of Raising Accountable Kids. He is the founder of QBQ, Inc., an organizational development firm dedicated to “Helping Organizations Make Personal Accountability a Core Value.” A 1980 graduate of Cornell University, John has been involved in the training and speaking industry since 1986. He lives in Denver, Colorado, with his wife, Karen. The Millers have 7 children and a really big bunch of grandkids! To reach John, email John@QBQ.com.
All Posts »
PrevPreviousBusting the Blame: It’s Not Complicated
NextPersonal Finance: “Help! I’m trapped and I can’t get out!”Next