Home » Practicing What I Preach: The Ultimate QBQ!

Practicing What I Preach: The Ultimate QBQ!

I missed my flight. There is nothing more frustrating than sprinting through an airport, and though truly no fault of your own, coming smack up against a closed door at your gate.

It has always been ironic to me that we conduct in live, interactive “Personal Accountability and the QBQ!” sessions all around the country, and then head to airports. With airlines. And delays. Hot beds of frustration, anger, and where the worst in people can come out.

Sadly, today was one of those days for me. It all started last night around 11pm when my airline cancelled my flight home from Louisville to my home in Madison*, WI. After almost 90 minutes on the phone, (83 of those minutes spent listening to advertisements and irritating music), I had a new flight on a different airline at an earlier time. I figured it was a blessing in disguise, getting me home to my children and husband two hours earlier than planned. I went to bed past midnight tired, but glad to have that settled. 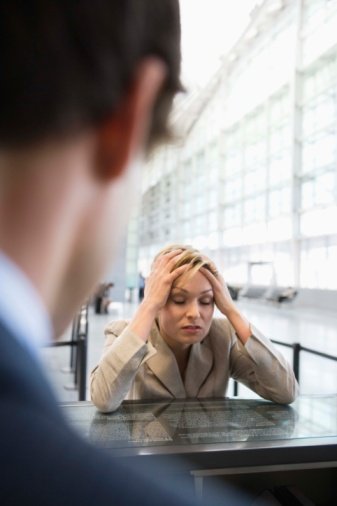 I had a blast this morning speaking for Pizza Hut on QBQ! and facilitating discussion around ideas like, “Stress is a choice,” “Asking better questions,” “Letting go of what we can’t control,” and other solid, true concepts. I spent more time than usual on the idea that stress is a choice. I must have subconsciously known I needed it …

I made my 1:24pm flight no problem. We landed on time in Detroit. And then the trouble began. We sat. And sat. And sat—waiting for a missing gate agent so we could park the plane and let us off. Here’s a summary of the extenuating circumstances that slammed together in this awful 30-minute window:

I got to my gate at 3:15 for a 3:25pm flight. They had already closed the doors! Two other passengers rushed up shortly after me. I saw my shocked and stricken expression mirrored on their faces. We could not believe that the two gates hadn’t communicated and held the flight we were already booked on!

As I collapsed in frustration and exhaustion, actually yelling, “Nooooo!” and pounding on the jet bridge door (I didn’t say it was my most shining moment…), I had this vague memory of teaching “Stress is a choice!” with an upbeat smile just a few hours earlier. I had a nagging thought that I’d also taught this: There are times when we have to just throw up our hands and ask The Ultimate QBQ! which is, “How can I let go of what I can’t control?!”

So after pacing, pulling my hair, pleading with the gate agent, and even pulling the “I have to get home to my kids!” card, I settled down, accepted my fate, and quietly asked the QBQ, “How can I get past this?”

It’s amazing the freedom and release I experience when I choose to stop the complaining, stop the rehashing, stop the finger pointing and the blame, and just say, “Man, what a bummer. How can I make the best of this frustrating situation?”

If I hadn’t missed my flight, this blog never would have been written. The nice elderly man I smiled at later wouldn’t have been smiled at. I would not have had the chance to practice what I preach. And how could I be a good teacher if I didn’t have chances to put my words into action?

What’s going on in your life that is outside of your control? How have you been responding? How would asking The Ultimate QBQ! help you?

*Kristin and her family now reside in Minneapolis, MN 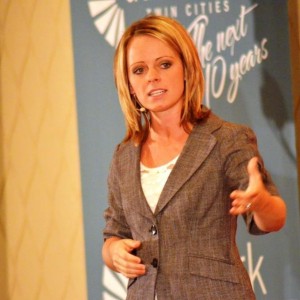 Kristin is a keynote speaker representing QBQ, Inc., an organizational development firm founded in 1995, dedicated to making personal accountability a core value. Kristin, the oldest of seven and daughter of John G. Miller, author of QBQ! The Question Behind the Question, has invested over a decade sharing the QBQ! message around the country. A graduate of University of Northwestern - St. Paul, Kristin lives in Minneapolis, MN with her husband, Erik, and their four children.
All Posts »
PrevPreviousPersonal Accountability: My Attitude of Gratitude
NextAccountability: The Coin of ChangeNext