If you’ve read Outstanding!, then you know all about the “47 ways to make your organization exceptional.” If you haven’t, here’s the list.

Our Colorado land-line and Internet provider is CenturyLink. They do a fine job for us, but I don’t go around raving about them. I have better things to do. However, I will take the time to extol the virtues of Mike, because people like him are the key to organizations being outstanding.

In the summer of 2012, Karen and I bought a “second home.” Yeah, I know, sounds snooty and uppity all at the same time. We didn’t plan to do it, but when we rented a house in Fraser, CO for a three day June get-away and saw that it was for sale, we asked, “Do we want to invest in this?”

So, we did. Overall, it’s been great, except for one thing: the DSL. Yes, even up in the mountains—I. Want. My. Internet!

So CenturyLink hooked us up. But it has always been a problem. It seems we’re at the end of a long line of Internet cable, so what is supposed to be a download speed of 1.5 MPS (remember, it is the Rockies), has often been only half that.

Then, one Friday afternoon while we were at the Fraser house, the Internet quit, so I called CenturyLink. After I fought through their phone system, a rep followed protocol—which means treating me like it’s 1999 and I’m someone’s grandma who’d never done this before. Together, though, we couldn’t solve the problem. So I asked her to schedule someone to come fix it on-site and she did, warning me I’d have to be at the house Monday morning to meet the repair person.

One problem: We live 88 miles east and weren’t staying past Saturday 11am. But I agreed and we ended the call.

On Saturday morn, however, I got a call from Mike, a local CL repair guy, who asked if he could come over and work the problem.

He arrived as we were leaving, so I told him I was happy to let him stay. People in the mountains trust each other, so I gave him our garage code and we headed back to Denver.

An hour later Mike called to explain what he’d learned. Then he went back to his area office to do some technical stuff and called me again with an update. He then called me on Monday from inside the house and, though a bit baffled, he was staying on it.

Mike was determined to solve the problem. 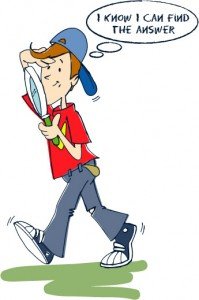 Then he called me a few days later to apologize because he was leaving for a week’s vacation and wondered if another CL tech could enter the home and work on my problem.

One week later, back from vacation, Mike phoned me. Why? Because they’d finally figured it all out and he was seeking permission to go back inside the house to make it right.

An hour later he called to say that our DSL was good again and ask if I would let him know how it was working the next time I was up there.

So, here’s my take-away:

After years of writing about and speaking on personal accountability, thanks to Mike, I have a new definition of OWNERSHIP:

NOT QUITTING UNTIL THE PROBLEM IS SOLVED!

Doesn’t that definition apply in any industry, inside any organization, at any time, to any individual—whether their name is Mike or not?

Allow me to answer that:

So be like Mike today. Said differently, be outstanding!

What problem at work or at home do you need to take ownership for? What will be the benefit in tackling it? Do you have a Mike story to share?

(If you are not subscribed, please do so here!)

John G. Miller is the author of QBQ! The Question Behind the Question, Flipping the Switch: Unleash the Power of Personal Accountability, Outstanding! 47 Ways to Make Your Organization Exceptional and co-author of Raising Accountable Kids. He is the founder of QBQ, Inc., an organizational development firm dedicated to “Helping Organizations Make Personal Accountability a Core Value.” A 1980 graduate of Cornell University, John has been involved in the training and speaking industry since 1986. He lives in Denver, Colorado, with his wife, Karen. The Millers have 7 children and 14 grandkids. To reach John, email John@QBQ.com.
All Posts »
PrevPrevious8 Truths of Accountability
Next7 Costs of BlameNext