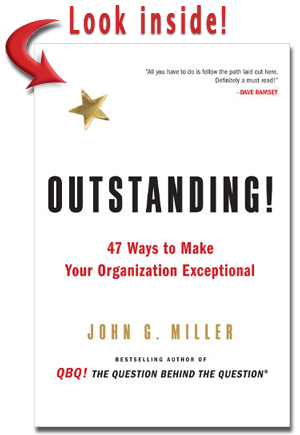 Every time I think the corporate world has a handle on this “customer service” thing, I hear an anecdote like the one below.

When we wrote Outstanding!—which Dave Ramsey endorsed because he knows how critical it is to not be mediocre—we included at least five chapters that today’s story could have fit into:

Never Forget Who Pays the Bills

Keep “The Mission” Top of Mind

Get Actions in Line with Values

But, since Outstanding! is already written, we’ll use it in this QBQ! QuickNote.

In response to our Outstanding Customer Service: Seize the Moment! blog published recently, Paul sent us his story …

John, every Easter we have a fun tradition: each child gets to order the pizza of their choice from the store of their choice. Since three of the five kids wanted pizza from Hungry Howie’s—and I had an on-line coupon for a free pie—I decided to place an order.

When the on-line system wouldn’t process it, I called the store to see if they could help me. The response?

“Sorry, that’s a corporate thing and I can’t give the free one away without an on-line order.”

So I spoke with the store manager and told him that I was attempting to order on-line and that the on-line ordering system wasn’t working. His response?

“Yeah, it’s probably because it’s Easter Sunday. But also it’s a corporate thing and I can’t do anything about it.”

Not wanting to penalize my children, I placed my order anyway and also wrote a comment on their website. I even offered to send them a copy of the QBQ! book so they could learn about personal accountability and how to take care of THE PAYING CUSTOMER!

The next day a Hungry Howie’s regional manager called me. When I explained what had happened, guess what his response was?

“Well, I admit the store could’ve explained it more clearly to you, but the coupon for the free pizza is only for the on-line ordering system, so they handled it properly according to the policy.”

Is “the policy” going to order more pizza’s from them?!? I hope so because I certainly won’t! When following “the policy” is more important than pleasing a customer, there is something wrong.

Hungry Howie’s in Jenison, Michigan will have to survive without this family’s hard-earned money.

Zowee! In summary, what can I add? Just one thing:

We love hearing from you!

(If you are not subscribed, please do so here)

John G. Miller is the author of QBQ! The Question Behind the Question, Flipping the Switch: Unleash the Power of Personal Accountability, Outstanding! 47 Ways to Make Your Organization Exceptional and co-author of Raising Accountable Kids. He is the founder of QBQ, Inc., an organizational development firm dedicated to “Helping Organizations Make Personal Accountability a Core Value.” A 1980 graduate of Cornell University, John has been involved in the training and speaking industry since 1986. He lives in Denver, Colorado, with his wife, Karen. The Millers have 7 children and 14 grandkids. To reach John, email John@QBQ.com.
All Posts »
PrevPreviousPersonal Accountability: Growing Up In Dysfunction Junction
Next6 Costs of a Dangerous Way of ThinkingNext