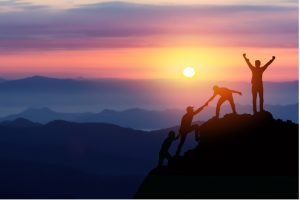 Joe Walsh, longtime rocker and member of the Eagles, nails addiction in his “One Day At A Time” lyrics. (Video here)

An addict himself, he figured it out.

Early in his song, he sings, “Well, I finally got around to admit I might have a problem—but I thought it was just too big of a mountain to climb.”

Good so far, gotta admit a problem exists, but not fully there yet. A bit later, Joe croons, “Well, I finally got around to admit that I was the problem; when I used to put the blame on everybody’s shoulders but mine.”

That’s the required shift to PERSONAL ACCOUNTABILITY—and it means everything. Only when I believe the struggle is my struggle to own, will I change.

It really is all about … me.

If you’re familiar with addiction, this all makes great sense to you. Until one takes complete ownership of the addiction, recovery will never come.

John, we’ve never met, but the QBQ! book has made a huge mark on my life, helping me work through many depressing challenges. I am now one decade sober. I’ve gone through seemingly insurmountable losses — financially, relationally, professionally — but asking QBQs has helped me remain accountable to others and myself, and continue moving forward.

When we wrote QBQ! little did we know how widespread the message would be applied. People in recovery using the content, marital counselors handing the book to couples, prison ministries helping inmates learn, grow, and change, and war veterans with PTSD in group settings studying QBQ!

When we all read QBQ! together, we realized we were playing the role of victims as we perpetually asked Incorrect Questions or IQ’s. It was just as the author says: We needed to stop with all the IQ’s, to give up the “Why me?” victim thinking and ask the empowering QBQ, “How can I change?” and “What can I do differently?” Bottom line, it is my responsibility to do “the work.” I know now I have to do the hard work—which I continue to do as I practice, practice, practice asking QBQs to be more personally accountable. QBQ! showed me how much I needed to change how I think.

Sylvia approached Kristin after Kristin had completed a “Personal Accountability & the QBQ!” workshop to share her story:

I was in the process of leaving my husband when the training manager at work handed me QBQ! And when I say, “leaving,” I mean I literally had boxes of stuff on the front porch. I was gonna drive away the next day. Then I read QBQ! and realized I was blaming and playing victim and needed to work harder—on me. That was 6 months ago, we’re still together and working it out.

Addiction, PTSD, marital strife, or everyday home and work stuff, QBQ! can help. Specifically, how has QBQ! helped you?

John G. Miller is the author of QBQ! The Question Behind the Question, Flipping the Switch: Unleash the Power of Personal Accountability, Outstanding! 47 Ways to Make Your Organization Exceptional and co-author of Raising Accountable Kids. He is the founder of QBQ, Inc., an organizational development firm dedicated to “Helping Organizations Make Personal Accountability a Core Value.” A 1980 graduate of Cornell University, John has been involved in the training and speaking industry since 1986. He lives in Denver, Colorado, with his wife, Karen. The Millers have 7 children and a really big bunch of grandkids! To reach John, email John@QBQ.com.
All Posts »
PrevPreviousOutstanding Organizations NEVER Stop Improving
NextBlame Game: 25 Reasons We Do ItNext