As we write in the Outstanding! book, employers must begin to “hire character over credentials.” Organizations would do well to focus less on college degrees and more on candidates with strong character. 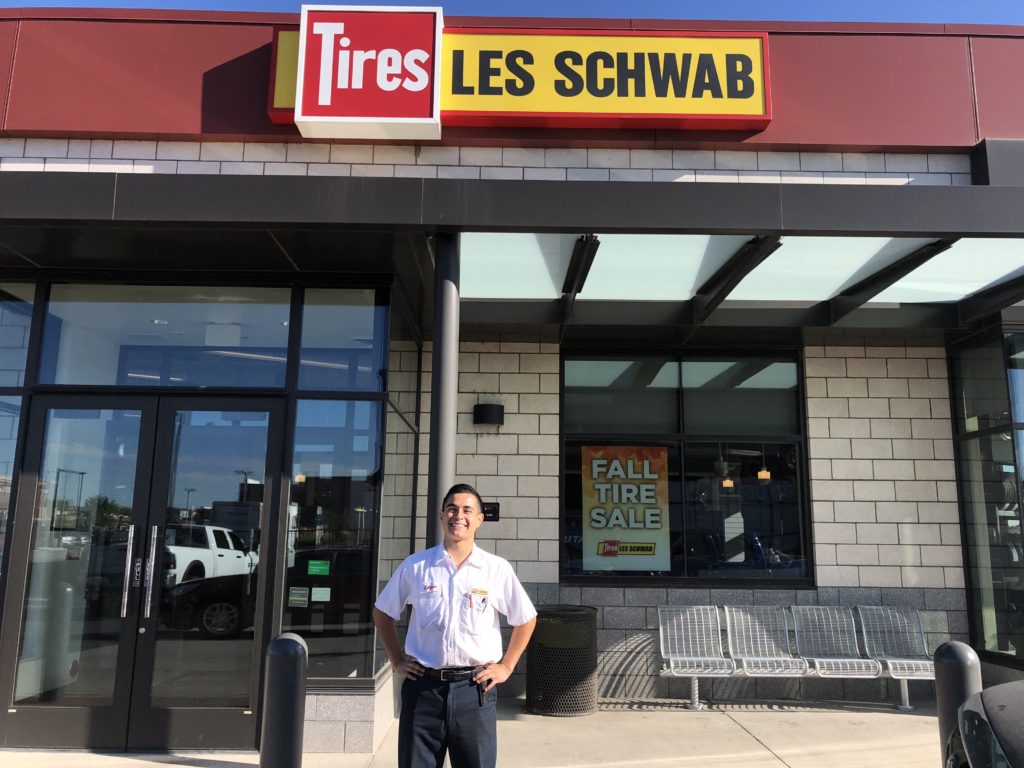 We get our vehicles serviced at our local Les Schwab Tire Center. Schwab is conveniently located only two miles from our home but the main reason we always go to Schwab?

Edgar, age 22, is a shining example of what a young person can do and become. Yes, the entire Les Schwab staff is courteous and helpful, and store manager, Jeremiah, gets credit for that. However, Edgar stands out.

Which makes him … outstanding.

Edgar’s character exudes from him at every turn. What’s so exceptional about this Edgar fella?

It could be how politely he says “Yes, Sir” and “No, Sir” to me. I surely don’t demand or need that, but it does tell me something good about Edgar.

Right along with his:

Are you getting an image of someone you’d be proud to hire? A person of character is a person who is enjoyable to employ.

As Edgar put new tires on my Tacoma, I asked how he got so good at what he does—a question he wasn’t expecting. He said humbly, “Thank you, but I wasn’t always like this.” Then he shared this story:

By 10th grade, Edgar was doing poorly in every class. Not much was going well in his life. He did participate on the school track team but “wasn’t very good.” In one race, though, as he struggled mightily in the final lap, heading toward a last-place finish, Edgar heard something he hadn’t heard before: The crowd began yelling loudly, enthusiastically cheering him on. It felt so good, Edgar kept going. When he crossed the finish line—last—all of the high school track fans stood to applaud.

As Edgar received a standing ovation from mostly strangers, he thought, If they’re applauding me for just finishing, then I need to finish better. Do better. Be better.

That special character-building moment occurred at the end of Edgar’s sophomore year, at just the right time in his life. Edgar retired from track, but over the next two years pulled straight As. Becoming a model student, he graduated easily and chose to immediately go to work—at Les Schwab Tire.

Edgar’s character, as it is for all of us, is the sum total of his choices. Possibly, some of those positive choices were driven by one moment in time when people eagerly honored him for his effort on a high school track field.

On that day, Edgar made a choice, a decision, to become an outstanding person, one of character.

There are several messages in Edgar’s story, such as choices build character, change can happen, and the power of encouraging others, especially young people.

What’s the #1 lesson you draw from the story of Edgar? We’d love to hear!

John G. Miller is the author of QBQ! The Question Behind the Question, Flipping the Switch: Unleash the Power of Personal Accountability, Outstanding! 47 Ways to Make Your Organization Exceptional and co-author of Raising Accountable Kids. He is the founder of QBQ, Inc., an organizational development firm dedicated to “Helping Organizations Make Personal Accountability a Core Value.” A 1980 graduate of Cornell University, John has been involved in the training and speaking industry since 1986. He lives in Denver, Colorado, with his wife, Karen. The Millers have 7 children and 14 grandkids. To reach John, email John@QBQ.com.
All Posts »
PrevPrevious6 Truths of Self-Pity and the Dangers of Victim Thinking
NextAccountable Thinking: Choosing Thankfulness Even In Pet LossNext