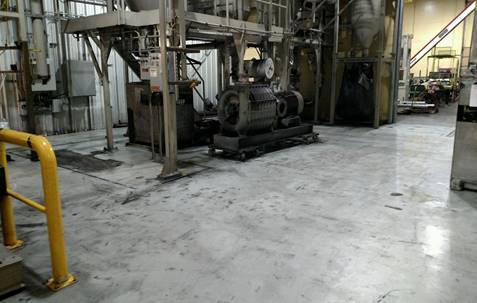 Since 2013, they’ve been inculcating the QBQ! message of Personal Accountability into their culture. They’ve facilitated our training system in-house, had both Kristin and me come speak, studied the books—and truly taken the message to heart.

Vice President of Manufacturing Engineering, Jeff Clark, who has spearheaded the QBQ! training, sent this email:

We have an area of the plant (shared by many departments) that gets neglected. Our Central Vacuum room is like that “closet” at home you throw everything into. Since our plant’s core product is dust (printer toner), it gets dirty. It’s dark, out of the way, and easily forgotten.

Simply put, the room has been a mess.

Last week, four employees (non-supervisory) chose to clean it and improve the lighting. They were not given this work. Just decided on their own to “get ‘er done.”

Here’s an email I received from Packaging Supervisor, Donnie Kayser:

Travis Sonne, Maintenance Supervisor, and I went to the Central Vac room to reset a valve fault and it was an obstacle course getting to the panel. There was clutter from multiple departments (Packaging, Production and Maintenance) and the light was broken. It was super dirty.

Paul Schumacher and Taran Toupal stopped by as we were talking about it.

Two hours later, Paul and Taran came and said, “We’re cleaning up that central vacuum room.” I could tell they were on a mission.

Later, Paul and Taran invited me to the room. I was totally amazed at how bright it is now and how great it looks without the clutter! They said Dave Thury and Miguel Suarez pitched in, too. Dave got the lights working, so the room is bright again.

I told Travis how much I appreciated the work they did. Travis said these guys took it upon themselves to do this cleanup project. They didn’t wait for it to be assigned. I could tell they were all proud of their work. We quickly agreed the team had asked a terrific QBQ: “What can I do to make this a cleaner and safer area?” A fine example of teamwork and QBQ! Their efforts are greatly appreciated!

Obviously, this is a story of Personal Accountability, ownership and people who “care enough to improve the place”—which is exactly who the Outstanding! book is dedicated to. In outstanding organizations, people do care.

There are many messages in this story, but for this salesperson who’s sold training since 1986, here’s a key one:

Some prospective clients—often executives in control of the purse strings and skeptical of the value of training—ask, “What’s the ROI on this program?”

For a long while, we at QBQ, Inc. have told them the truth: you don’t measure training that way (dollar and cents). You measure training by witnessing action and behavioral change. In other words, what people do as a result of the training.

Just like these outstanding Toshiba folks in South Dakota who did not say, “This isn’t my job!” but asked, “How can I make a difference?”

This is when you know training is working—and that’s just plain exciting. At least to a guy who’s sold training for 33 years. ?

John G. Miller is the author of QBQ! The Question Behind the Question, Flipping the Switch: Unleash the Power of Personal Accountability, Outstanding! 47 Ways to Make Your Organization Exceptional and co-author of Raising Accountable Kids. He is the founder of QBQ, Inc., an organizational development firm dedicated to “Helping Organizations Make Personal Accountability a Core Value.” A 1980 graduate of Cornell University, John has been involved in the training and speaking industry since 1986. He lives in Denver, Colorado, with his wife, Karen. The Millers have 7 children and a really big bunch of grandkids! To reach John, email John@QBQ.com.
All Posts »
PrevPreviousWhen Serving Customers, Who’s It All About?
NextDiet Coke or Diet Dr. Pepper—It’s All QBQ! ServiceNext