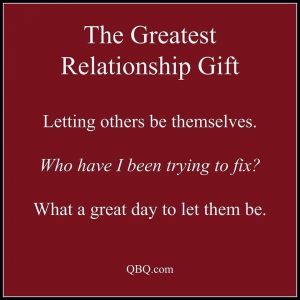 When I finished teaching “Personal Accountability & the QBQ!” to a fine group, Monica approached me. She said …

“I read QBQ! a couple of months ago … it saved my marriage.”

Taken aback, I thanked her and asked, “Can you tell me the story?”

“Sure. Before work one day, I loaded my trunk with some stuff because I planned to leave my husband after work. That morning my boss gave me the QBQ! book, so I read it over lunch. I immediately knew my mistake … .”

I encouraged her to continue with, “Which was?”

“I’d been trying to fix my husband.”

I responded, “I appreciate you sharing this. How’s it going now?”

Monica said, “It’s not perfect, but we’re still together.” 👏🏻

Recently, my wife, Karen, and I have heard from a bunch of people about relational stuff. Folks who want or need to vent—which we understand.

A man angry at his mother for her manipulative behaviors.

A wife resentful because her husband won’t curtail his drinking.

A son unable to comprehend his father’s coldness.

A dad troubled by a grown child’s financial decisions.

A woman hurt over being “gaslighted” by a friend.

A mom frustrated by her teen’s sullenness and introversion.

A couple unhappy with an offspring’s career move.

To give these scenarios context, not one of these frustrated, bewildered, hurt, or angry people is under 30 years old. We’re not talking ‘tweens and teens here—or even Gen Zrs—but rather those of a “mature” age.

To be clear, I’m not saying humans should never feel frustrated, hurt, or angry. Real-life scenarios like these can be very challenging. But, when we embrace the truth shared below, well … everything is better.

In 1991, eleven years married, Karen came to me to say, “Johnny, I’m going to marriage counseling. You coming?!”

I hoped counseling would fix Karen. 🙂

Instead, I learned a truth that I’ve discovered again and again: I can only change me. Period.

Back to our seven examples above and the obvious theme:

If only others would listen to me, understand me, and change!

So, when people share with Karen and me and then ask, “So what should I do???” they’re gonna hear the message of the QBQ! book, over and over again:

I’m sure it gets repetitive, but as we say in QBQ!, “Repetition is the motor of learning.”

Now, if this fundamental yet life-changing idea of striving only to change self is one you need to apply today, go for it. The rewards will be great—promise!

Question: Other than yourself, who have you been trying to fix? 😊

John G. Miller is the author of QBQ! The Question Behind the Question, Flipping the Switch: Unleash the Power of Personal Accountability, Outstanding! 47 Ways to Make Your Organization Exceptional and co-author of Raising Accountable Kids. He is the founder of QBQ, Inc., an organizational development firm dedicated to “Helping Organizations Make Personal Accountability a Core Value.” A 1980 graduate of Cornell University, John has been involved in the training and speaking industry since 1986. He lives in Denver, Colorado, with his wife, Karen. The Millers have 7 children and 14 grandkids. To reach John, email John@QBQ.com.
All Posts »
PrevPrevious13 Consequences of Blame
NextLeadership: “I take full accountability”Next