Pruning: “to remove unneeded branches or limbs; to trim; to clear the undesirable” 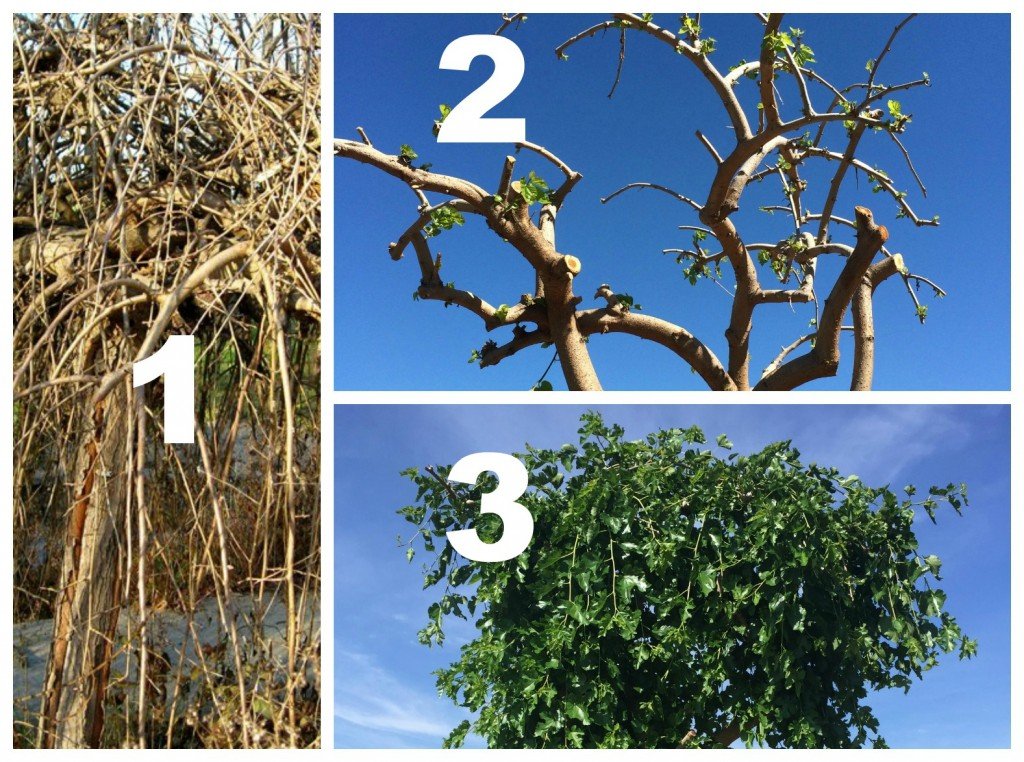 It might be the most common metaphor of all time, but it works. In the collage above:

Image One: Our upside down Mulberry tree, appearing dead.

Image Three: One month later, we have the healthiest Mulberry tree evah!

Pruning trees works. It also works for people—if we let it.

So often, though, the “undesirable” in us doesn’t get trimmed away because when someone tells us, “You really need to change!” we respond with …

In my early thirties, an older fella told me, “You’re a defensive young man.” As I stood there glaring back at him with my arms crossed, I said something like, “THAT ISN’T TRUE! I AM NOT DEFENSIVE!”

My body language and reaction proved his point.

As longtime parents and authors of Parenting the QBQ Way, Karen and I have noticed defensiveness in dads and moms. When it comes to raising kids, there’s a real “pride of ownership” that engenders parental responses such as, “DON’T TELL ME HOW TO RAISE MY KID!!!”

Defensiveness, of course, doesn’t exist only in regards to parenting.

Where does our need to defend come from?

Pride. Perfectionism. Fear of loss or failure. Embarrassment. How we were brought up. The work environment we function in daily, like a super political culture where we must always “watch our back.” (That doesn’t happen in outstanding organizations—but I digress!)

No matter the reason(s) for our defensiveness, those who believe in PERSONAL ACCOUNTABILITY understand the need for this critical question:

How do I move beyond my human need to defend myself and allow other people’s input into my life?

Good question. And here’s a good formula to keep in mind when it comes to personal growth: 2 minus 1 equals 3.

The fastest way to make a leap forward is to take a step back.

To help us all make that leap, allow us at QBQ, Inc. to provide practical steps to applying input from others … because whether we like it or not, we’re going to get it! 🙂

1. Pause. By biting my tongue and arresting my negative thoughts, I am able to resist the human urge to lash out at an advice-giver. This allows me the moment I need to open the door to positive personal change.

2. Process. Pondering the feedback provided with questions such as, “Is this input true?” “How can it help me?” and “Is there any reason not to try it?” lets me consider the merits of the feedback.

3. Practice. Doing it. When I try an idea someone has proposed—who knows?—it might just work! One never knows till one tries.

4. Persist. By persisting to practice the new idea, 30 days later it will be a habit. As we share on the final page of QBQ! The Question Behind the Question, “Repetition is the motor of learning!”

5. Praise. Returning to the person to give them praise for speaking into my life is a good thing to do. Quoting the 1970’s Skin Bracer cologne ad, all I need to tell them is, “Thanks, I needed that!”

Pruning. It works. For trees and people.

How do you tend to handle input from others? What pruning have you allowed into your life and who did it come from?

If you are not subscribed, please do so here.

John G. Miller is the author of QBQ! The Question Behind the Question, Flipping the Switch: Unleash the Power of Personal Accountability, Outstanding! 47 Ways to Make Your Organization Exceptional and co-author of Raising Accountable Kids. He is the founder of QBQ, Inc., an organizational development firm dedicated to “Helping Organizations Make Personal Accountability a Core Value.” A 1980 graduate of Cornell University, John has been involved in the training and speaking industry since 1986. He lives in Denver, Colorado, with his wife, Karen. The Millers have 7 children and 14 grandkids. To reach John, email John@QBQ.com.
All Posts »
PrevPreviousThe Accountable Person’s Bill of 39 Rights
NextIf We Can’t Earn Your Business, Hire Mark SanbornNext