Home » Then my wife said, “You should travel more!”

Then my wife said, “You should travel more!” 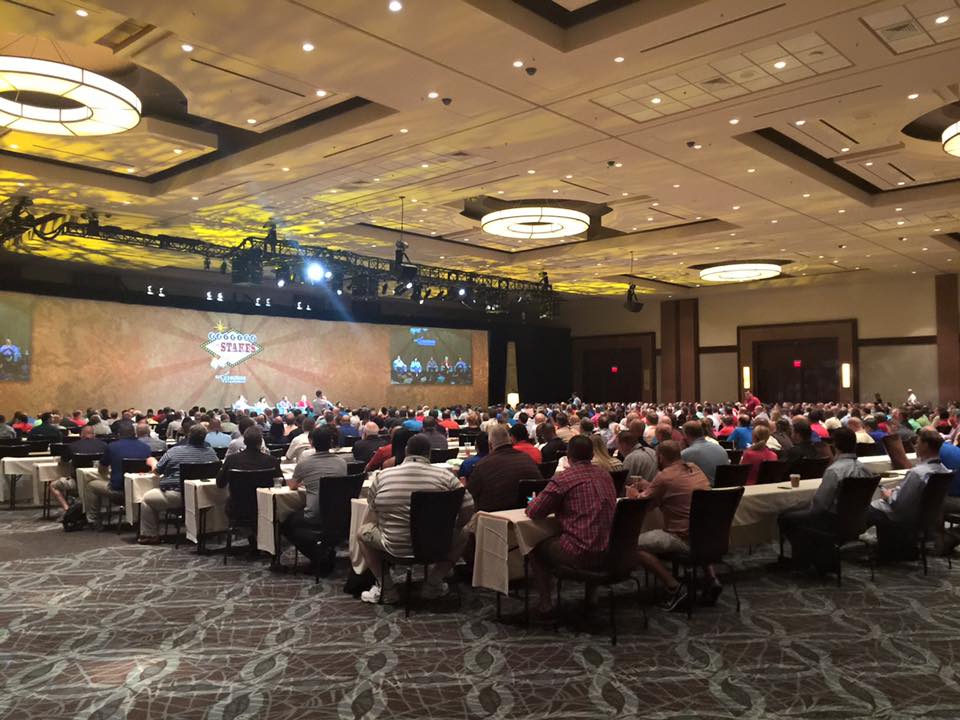 “How do you get to Carnegie Hall?”

“How do you get to Las Vegas to be the closing speaker for a Longhorn Steakhouse (a Darden company) event for 540 managers?”

The answer comes with a backstory:

I’ve been speaking professionally for two decades. My best friend, Karen, has seen me present many times. However, until she tagged along for my “Personal Accountability and the QBQ!” event in Monument, Colorado last week, it’d been three years!

Three years since my wife of 35 years had the opportunity to provide input on my professional work.

Driving to Monument, I mused aloud (she says I “muse aloud” often) about how it all began in 1995. In only my second speaking engagement ever, I said something to a Minnesota audience that caused my feelings-driven, others-centered gal to want to drop to her hands and knees and crawl anonymously from the hotel ballroom!

Later that evening I was given “feedback”—and didn’t take it too well.

Can you say “defensive and immature hubby”?

In 2003, Karen traveled to California to witness a QBQ! session at a pharmaceutical sales conference. More feedback. I took it better. In fact, it was such good, specific coaching, I still use the input given to me that day by my life partner …

The same life partner who back in 1986 gave me her blessing to quit my secure corporate job with the mammoth firm, Cargill, to sell training for a company with only eight employees!

I’m not only blessed because she let me go my own way, but also because she’s not been afraid to speak up—even though assertiveness is not a natural trait for her.

Truthfully, without Karen’s coaching down through the years, I’d never have grown as a speaker.

Now, back to the Monument, CO event …

After the session, Karen offered feedback before I could ask for it. As we climbed into my Tacoma, this exchange took place:

Karen: “You really should travel more.”

John: “I’m sorry, not sure I heard you right. You want me to leave home more often?”

John: “Oh, well, gee … okay … but what about today’s session? What should I change?”

John: “Nothing? That’s it? No other feedback?”

Karen: “You spoke with authority. The world needs the QBQ! message of accountability. It was really good. You even made me laugh. You should travel more.”

This exchange between two fiftysomethings, who’ve been dating since 1976 and know each other through and through, was a good one.

In fact, making it to Carnegie Hall couldn’t top a moment like that!

How well do you handle feedback? Who in your life—at work or at home—has your permission to freely provide you input?

If you’re not getting our FREE QBQ! blogs by email, click here!

John G. Miller is the author of QBQ! The Question Behind the Question, Flipping the Switch: Unleash the Power of Personal Accountability, Outstanding! 47 Ways to Make Your Organization Exceptional and co-author of Raising Accountable Kids. He is the founder of QBQ, Inc., an organizational development firm dedicated to “Helping Organizations Make Personal Accountability a Core Value.” A 1980 graduate of Cornell University, John has been involved in the training and speaking industry since 1986. He lives in Denver, Colorado, with his wife, Karen. The Millers have 7 children and a really big bunch of grandkids! To reach John, email John@QBQ.com.
All Posts »
PrevPrevious17 Things a Good Friend Does Not Do
NextKristi of L.L. Bean Saves the Day!Next