Home » How to Succeed!

In spite of the precious child pictured below, this message is not about QBQ! parenting (but this was). Also, be forewarned: We will be mixing our metaphors today! Lastly, stick around till the end where we apply the content. I mean, isn’t that what it’s all about? Enjoy! 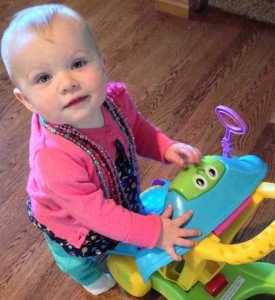 After Kristin, our firstborn, arrived in 1983, I began carrying a Canon AE-1 camera everywhere I went, exclaiming, “That’s a picture!” Drove my wife, Karen, nuts.

But it’s what new dads do.

Thirty years later, with an ever-present smart phone in my pocket, I see stuff everywhere and exclaim, “That’s a blog!”

It’s what old authors do.

So, while watching beautiful “Becca Boo,” Kristin’s child and our miracle granddaughter (her story here), not take her first step the other day, I thought, Hmm … there’s a message in this picture for each of us.

Whether it’s a 13-month-old about to take her first step or a “grown-up” wanting to succeed in a new endeavor, the requirements for success are the same:

(No, not the spiritual kind)

In baby Becca’s case, due to no experiences (she’s not taken a first step), she has no confidence (she doesn’t feel capable), so she lacks faith (no belief) in what she can do tomorrow.

Or, more accurately for a soon-to-be toddler—one minute from now.

When I was a boy, my dad, Jimmy Miller—coach to some, pastor to others—would explain “faith” by asking, “Is the sun going to rise in the morning?”

When a person answered, “Yes, of course!” he’d challenge with, “How do you know? It hasn’t happened yet.”

“Well, I’ve had many experiences with it rising, so I’m confident today that it will tomorrow.”

And he’d say, “That fact that it has not yet risen tomorrow and nobody has evidence that it is going to but you believe it will means you have faith.”

Now back to those three components requirements for success:

Experiences are about our past

Confidence is about our present

Faith is about our future

As his dad, I have always known that Michael, the only son of seven Miller children, possesses a “sales personality.”

But he didn’t know it.

After attending college for musical theater, Mike found work at a credit union. For him, it was a job, not a career. He didn’t believe in the stuff he was told to sell, like credit cards and savings accounts earning 1%. It was a way for him to pay the bills.

One day, using a borrowed camera and his spare time, Michael made a short video for a couple who owns a small business. His simple purpose was helping them “tell their story to those who need to hear it.” They raved—and referred him to a friend who needed a film for his organization’s website and Facebook page. That fella raved, too.

From these successful experiences, came confidence.

With these experiences behind him and confidence in him, Mike quit his job—on faith—and started Sun Prairie Films. Now he gets out of bed in the morning believing he can make the next sale. He has faith in his future.

Recently, he walked into a Sonic Restaurant that wasn’t quite built yet and asked for “the boss.” He proceeded to sell the owners on using him to film their grand opening. If you don’t know much about the profession of sales, let me assure you—that’s real selling!

I’m so proud of Michael I couldn’t resist mentioning him in this Entrepreneur On Fire interview with host, John Lee Dumas. If you have anything that you need to accomplish, you might enjoy listening to two high-energy Johns going at it in this interview!

So, three metaphors, three things required to succeed. Where do we go from here? Well, here’s a novel idea: Let’s put the content to use!

But first, a one line summary:

Positive EXPERIENCES engender CONFIDENCE which gives us FAITH in tomorrow … or even later today!

Are you like little Becca, needing some new experiences? If so, what are they?

In what specific area of your life could you stand to increase your confidence?

Perhaps you need to take a step of faith and make a change? If so, what would that look like?

PS: Read the above blog again. As we say in the QBQ! book, “Repetition is the motor of learning”!

If you liked this message, you’d like this one, too: The Absolute Secret to Goal Setting

John G. Miller is the author of QBQ! The Question Behind the Question, Flipping the Switch: Unleash the Power of Personal Accountability, Outstanding! 47 Ways to Make Your Organization Exceptional and co-author of Raising Accountable Kids. He is the founder of QBQ, Inc., an organizational development firm dedicated to “Helping Organizations Make Personal Accountability a Core Value.” A 1980 graduate of Cornell University, John has been involved in the training and speaking industry since 1986. He lives in Denver, Colorado, with his wife, Karen. The Millers have 7 children and a really big bunch of grandkids! To reach John, email John@QBQ.com.
All Posts »
PrevPreviousAccountability: The First Brick of Success
Next“But … it wasn’t my fault!”Next