The enduring power of PERSONAL ACCOUNTABILITY.

And if you don’t know, that’s what the QBQ! book is all about.

Why is PERSONAL ACCOUNTABILITY still the foundation of all success? Because of the human traps QBQ! addresses that will forever exist.

Those traps and the lousy questions that signify them:

Victim Thinking: “Why is this happening to me?” “Why do we have to go through all this change?” and “Why don’t others help out more?”

Entitlement: “Why do others have more than I do?” and “Why doesn’t someone give me a job?”

Blame: “Who made the mistake?” “Who dropped the ball?” and “Whose dumb idea was that?”

Procrastination: “When will someone handle this problem?” “When will others do their job?” and “When will the customer call me back?”

The Longevity of QBQ!

Little did I know when I coined the phrase “the question behind the question” in 1994 and then taught this new idea at St. Jude Medical in St. Paul, MN, that we’d be here today, still helping people ask The Question Behind the Question—or QBQ.

But we are—and it’s not a testament to John Miller or even my teammates, daughter/speaker Kristin Lindeen and co-author David Levin.

The longevity of QBQ! is unshakeable evidence of the power of PERSONAL ACCOUNTABILITY.

Reflecting on the lousy questions listed above, QBQ! helps us practice PERSONAL ACCOUNTABILITY by asking better questions (QBQs) like these:

“What can I do to contribute?”

“How can I adapt to the changing world?”

“How can I help solve the problem?”

“What can I do to take complete ownership in and for my life?”

Accountability is Not a Topic!

When I first started to speak on QBQ! in the mid-90s, I was told by a speaker’s bureau I’d fail because “accountability is not a topic.”

Well, they were half right: It’s not a topic. PERSONAL ACCOUNTABILITY is an over-arching core principle that applies to absolutely every aspect of life.

Or as one executive at AutoTrader.com put it: “QBQ! reminds me of English muffins: It seeps into every ‘nook and cranny’ of my life!”

So, today, on another “launch day,” I’m here to say thanks to the many followers of and believers in the QBQ! message. Your commitment to live a life of PERSONAL ACCOUNTABILITY in a society that doesn’t value this principle is impressive. We would not be here today holding this new edition of QBQ! if it were not for you. 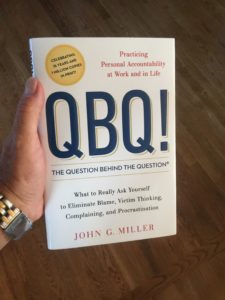 However, I must close with this: The QBQ! book and its message of PERSONAL ACCOUNTABILITY were never meant for you. Why?

Because I still can only change me.

What has QBQ! done for you? Please share here!

John G. Miller is the author of QBQ! The Question Behind the Question, Flipping the Switch: Unleash the Power of Personal Accountability, Outstanding! 47 Ways to Make Your Organization Exceptional and co-author of Raising Accountable Kids. He is the founder of QBQ, Inc., an organizational development firm dedicated to “Helping Organizations Make Personal Accountability a Core Value.” A 1980 graduate of Cornell University, John has been involved in the training and speaking industry since 1986. He lives in Denver, Colorado, with his wife, Karen. The Millers have 7 children and a really big bunch of grandkids! To reach John, email John@QBQ.com.
All Posts »
PrevPreviousPERSONAL ACCOUNTABILITY: Be a Jerk Today!
NextFlip the Switch: Unleash the POWER of Personal AccountabilityNext